Is the Department of Education Trying to Give Your Money to Organizations that May Infringe on Your Rights? 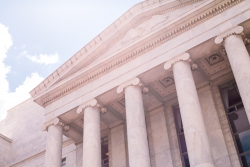 Part 1 of the NPRM seeks to:

The concern here is that these faith-based organizations do not have to use the funds “on equal terms”.  The NPRM appears to allow funding of programs and institutions that may prohibit student membership based on religious beliefs, sexual orientation, or other factors.

President George W. Bush proposed a faith-based initiative where religious groups could apply for funding to provide social services.  The 2001 Executive Order (E.O.) 13279 directed specified agency heads to review and evaluate existing policies that had implications for faith-based and community organizations relating to their eligibility for Federal financial assistance for social services programs.   The resulting regulation was amended in 2002 to indicate that an organization that received a grant would not be allowed to discriminate against a beneficiary, or prospective beneficiary, of that program on the basis of religion or religious belief.

In May 2017 President Trump issued E.O. 13798 saying that “Federal law protects the freedom of Americans and their organizations to exercise religion and participate fully in civic life without undue interference by the Federal Government.” It further directed the Attorney General to “issue guidance interpreting religious liberty protections in Federal law.”

The Department of Education’s NPRM is based in part on a June 2017 Supreme Court decision in Trinity Lutheran.  The court ruled 7-2 that religious organizations may not be excluded from state programs if they have a secular intent.  In the majority opinion, the justices argue that excluding religious groups from this kind of state funding would discriminate against them based on religion.

We urge Secretary of Education to abandon Part 1 of this NPRM.

Faith-based organizations provide valuable services and are important to the communities they serve.  They provide insight to students and can instill an open-mindedness to unfamiliar perspectives in life.  This is the purpose of education.  Public colleges and universities generally have rules for their student organizations which prohibit discrimination and maintain an open and welcoming environment.

Faith-based organizations deserve to be equally funded, and maintain their identity as well --- as long as they do not impose barriers to membership in violation of the Civil Rights Act of 1964 (CRA).  Title VII of the CRA prohibits discrimination (based on religion, national origin, race, color, or sex) in public places, and provides for the integration of schools and other public facilities.

To that end, the Department of Education has a duty to provide oversight to ensure that taxpayer-funded organizations observe, and abide by, the principals of the CRA.  This NPRM, as written, will allow funding of discriminatory practices using taxpayer dollars.

What Can You Do?

Students are urged to comment on this proposed rule at regulations.gov  (Federal Register Number: 2019-26937) prior to the closing date of February 18, 2020.